Did Joe Biden Just Steal from a ‘The Simpson’s’ Episode?

This time, however, it is life imitating art.

If you are a fan of “The Simpson’s,” you are not going to believe this report.

In 2007, there was an episode of “The Simpson’s” where Tom Hanks is pressed into duty.

The government recruited Hanks to do a PSA.

Now, this is where it gets pretty funny, as Hanks’ opening line is, “Hello. I’m Tom Hanks. The US Government has lost its credibility, so it’s borrowing some of mine.”

Biden’s inaugural committee announced that Hanks would be doing a video to mark Joe’s first anniversary in office.

The committee stated, “In recognition of the President’s first year in office, the Biden-Harris Presidential Inaugural Committee believed it was important to celebrate the strength and perseverance of the American people in the face of extraordinary adversity, just as we did a year ago today.” 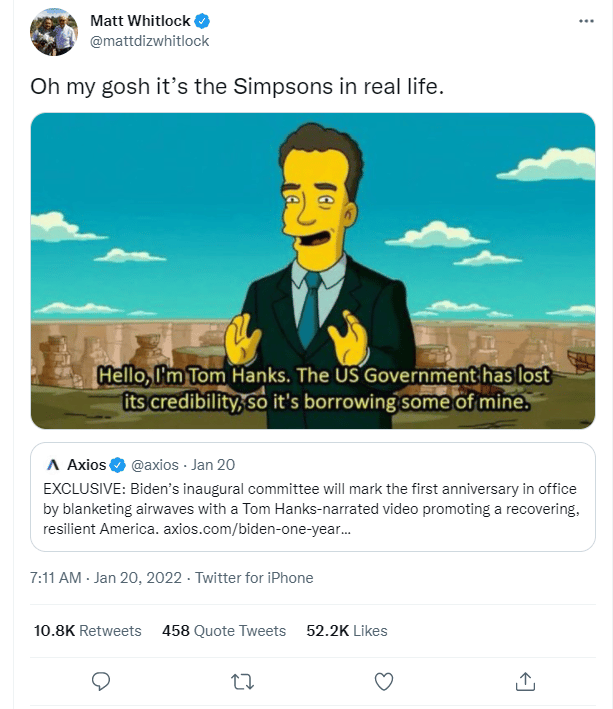 Tom Hanks is an amazing actor, but he is also a bleeding heart liberal.

However, I can say this…

The video appearance for Biden will have to be his best acting performance EVER if he thinks he is going to be able to sell this clown show as a legitimate administration that has actually achieved something during its first year.

What do you think of Hanks doing a video to promote Biden and Harris’ “achievements” during the first year in office?

Tell us in the comments section below.

My heart breaks for the city of Uvalde. Pray for our families.

“Children are a gift from the Lord; they are a reward from him.” “Jesus said, 'Let the little children come to me, and do not hinder them, for the kingdom of heaven belongs to such as these.”

An absolutely heartbreaking tragedy. Praying for the people of Uvalde after this senseless act of violence.

Joe Biden's INCOMPETENCE is to blame for the baby formula shortage.

Don't take our word for it — take it from Democrats AND the media.